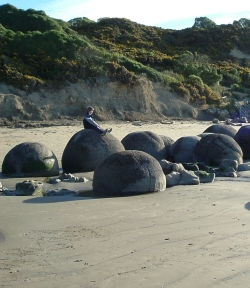 These solid spherical stones, scattered over the beach on the South Island of New Zealand, look like the remains of a monster game of marbles. (Click image to enlarge.)

They are spectacular examples of concretions, which form when a mineral precipitates from the ground water cementing the loose grains of sediment into solid rock. As you walk down the steep bluff to the beach you can see other enormous boulders being exposed as the ocean erodes the loose embankment. They eventually fall out of the embankment onto the beach.

The boulders are all large balls and a fascinating tourist attraction about 70 km north of Dunedin.

The tourist signs say they took four million years to form. I wonder how they measured that. People reading the sign could be excused for thinking that the time was carefully measured with a scientific instrument. It was not measured but calculated from diffusion models based on a range of assumptions about how it was envisaged the concretions formed. The result fits with the assigned multi-million-year Paleocene age of the enclosing mudstone so it is considered to be acceptable.

The fact is that sediment can be cemented into hard rock within days. It all depends on the conditions. See Rapid Rock. The sediments containing the boulders would have been deposited very late in the global Flood or just afterward—about 4,500 years ago. The 4-million-year age on the tourist sign is another example of the constant indoctrination of the public into the belief system of millions of years.

UPDATE 4 June 2009:
I’ve made a few changes to this article based on feedback from Mike Sloane, which I appreciated.