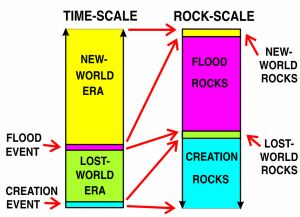 Biblical geology is a simple model that I developed to classify the rocks of the earth using a biblical framework of thinking.

In some ways it is a new idea but in others it is not.  The pioneers of geology looked at the world in the same way I’ve outlined on my biblical geology website. They assumed the Bible records the true history of the world and they used the Bible as their starting point to explain the rocks and fossils. One such pioneer was Nicholas Steno, who was a six-day young-earth creationist.

The thinking of the geological pioneers was never shown to be wrong. Rather, the cultural and political atmosphere of late 1700s early 1800s was such that the new-school geologists searched for a way to explain the past without reference to the Bible. The in-philosophy was Deism. The philosophy the geological writers came up with was called “uniformitarianism”, which is an anti-biblical worldview.

Charles Lyell, author of the influential book “Principles of Geology”, recognized that his new philosophy contradicted the Bible and he spoke of his desire to “liberate geology from Moses”.  They never engaged the issues but ignored any who critiqued their philosophy or presented alternative ideas based on the Bible. One biographer of James Hutton made exactly that point when he said that Hutton did not disprove the Bible but ignored it.

The Deism that underpinned the new geological ideas, even the early editions of Darwin’s Origin, morphed into the full-blown atheistic philosophy that has taken over the academic and cultural square of the west in the last 50 years, leading to the cultural wars and a strident censorship of alternatives.

It would be nice to break the stranglehold of that naturalistic philosophy, which disingenuously presents itself as “scientific” and excludes  other views as “religious”. But uniformitarianism, which dominates geological thinking today, is very much a religious philosophy and it should not be insulated from competing ideas.

UPDATE 24 June 2020: See some details here about me from some years ago.

I will try to post occasional comments on things geological on this blog. Enjoy.