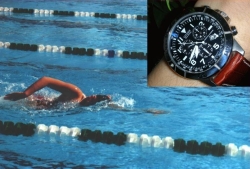 A swimming race illustrates the simple principles involved in measuring time. This swimmer is competing in a 1,500 metre race and we have an accurate, calibrated wristwatch. We note that at the instant the swimmer touches the edge of the pool our wristwatch reads 7:41 and 53 seconds. How long has the competitor taken to swim the 1,500 metre race?

When I have asked an audience this question they have looked at me incredulously and said, “Starting time?” You cannot know how long the swimmer took unless you knew the time on the wristwatch when the race started. Without the starting time it is impossible to establish the time for the race. Note: Impossible.

Actually, knowing the starting time is still not enough. During the race you have to watch the swimmer and count how many laps he has swum so you know that he has done 1,500 metres. And you have to check to make sure he touches the edge at the end of each lap. Without these observations you cannot be sure that the time is valid. That is why you need at least two, sometimes three judges to measure the time of the race to the standard needed to enter the record books.

It would make no difference how accurate or high-tech the wristwatch was. You could talk about the tiny quartz crystal and the piezoelectric effect used to provide a stable time base for the electronic movement. You could describe the atomic workings of the quartz oscillator and how it resonates at a specific and highly stable frequency, and how this is used to accurately pace a timekeeping mechanism.

But without reliable witnesses the accuracy of the watch makes no difference. You can only establish the time for the race if it was timed by two or more qualified eyewitnesses who observed the start, the progress and the finish.

This illustrates the whole problem with the radioactive dating of geological events. Those who promote the reliability of the method spend a lot of time impressing you with the details of radioactive decay, half-lives, mass-spectroscopes, etc. But they omit discussion of the basic flaw in the method: you cannot measure the age of a rock using radioactive dating because you were not present to measure the radioactive elements when the rock formed and you did not monitor the way those elements changed over its entire geological history.

If you check this educational page by the US Geological Society you will see that they spend all their time talking about the technicalities of radioactive decay. But they do not even mention the basic problem that you cannot know the radioactive concentrations that existed in the rock in the past.

In other words, the fatal problem with all radioactive dates is that they are all based on assumptions about the past. You can get any date you like depending on the assumptions you make. And that is what geologist do, they make up an assumed geological history for rock depending on the numbers that come from the geochronology lab (see Dating secrets).